Today I made a set. A present, which should have been with the recipient today, but I just couldn't get it finished in time with my back and all :o( 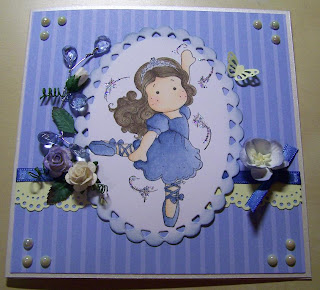 The colours are slightly off due to the artificial light, but I'll take some more pictures tomorrow, perhaps they'll turn out better.
I think, the card turned out quite well. These blue Copics (B91 - B97) are quite hard to blend, even on the Canson paper, but it turned out okay and I could keep the bleeding to a minimum. Thank God for small favors.

The box not so much: 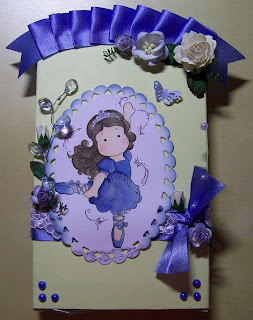 I basically screwed up anything about it there was to screw up.

1. Coloration. I colored this image when I received my first order of Copics. It was my second attempt after the Tilda with frog I showed here and I used SU Whisper White cardstock for it. The bleeding was horrible. I usually do the skin first, but I learned from this piece that the skin comes last whenever I use these blues (did it that way with the card and could erase a lot of bleeding this way, before I did the skin). The blues wouldn't blend no matter what. I used B99 here as well, but left it away ever since, because it's just too stubborn.

2. The yellow paper. I don't have a nice yellow design paper and went for this plain yellow paper instead. It's nice, it really is, but I should have done something to it first. Stamp a pattern on it or add some shimmer or anything. It looks too blah.

3. That blue whatever I did with the ribbon... I don't know what I was thinking. It's so ugly.

If I wasn't horribly late already, I would redo it and probably go with the style of the card for the box as well. I made the box first, big mistake.

Well, I hope the present IN the box will make up for the horrible look it has and at least the card turned out somewhat beautiful.


My back is still a mess. After coloring the Tilda for the card, I could hardly get up from my chair let alone walk the short distance to the living room and the couch. Damn. I need some serious painkillers and muscle relaxing medication to get rid of this.

Here are the pictures in natural light I promised. They are a lot better and show the colors much more as they are. 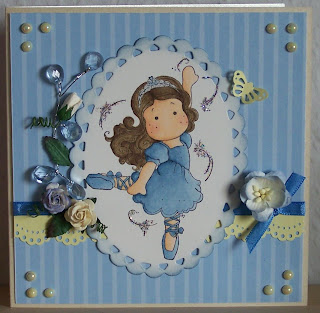 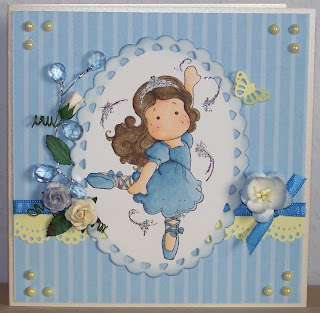 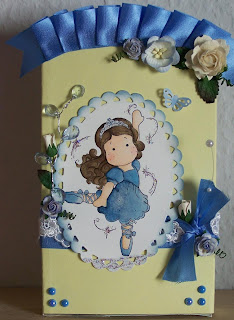 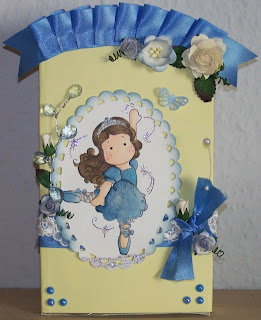