Another project I didn't show last year. I made this in November and submitted it to Magnolia Ink, but as I don't have my copy of it yet I don't know if I did make it into the magazine... I guess not, but I thought I should at least try *g*

It's my second attempt at making a candle. I just realized I didn't take any pictures of the first one. I'll do so the next time I visit my parents, as I gave both candles to my mum. She liked the first one though I thought it was crap. I did it according to various tutorials I have seen in different place, but the wax color I use doesn't mix well with the heat gun and even though I used a light color on that first candle it interfered too much with my picture of Tilda. So I changed the glueing the picture on with heat to: Put the picture on double sided white sticky foil to rescue your coloring and get the image on straigt in in one piece. *g* 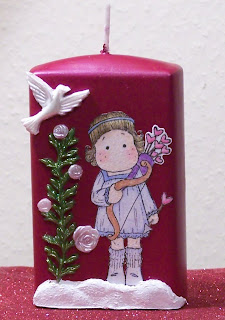 I guess you'd need to take the picture off before you could burn down this candle, but I can't really say I do have to care about such details since my mother would NEVER light that candle *lol*.
Eingestellt von kuya um 10:24 1 Kommentar: Links zu diesem Post

Oh my god, I didn't believe I would make it in time. I had a BLAST with this challenge, but my main project (I did three) took up a tremendous amount of time, I needed some supplies for it and couldn't get them and so and so on. Sunday I really thought I wouldn't finish it. I had something else ready by then, but that wasn't THE idea I wanted to show to the world *lol*.

I decorated a tin. Yes, a tin, again not a card, I know, but I've had the idea for this tin in my head since last summer and I just had to make it now, it wouldn't let me go. I also made a card, just to show I can, even if it's a simple one. You can find it somewhere dooooown there after all those pictures of the tin and it's many details. 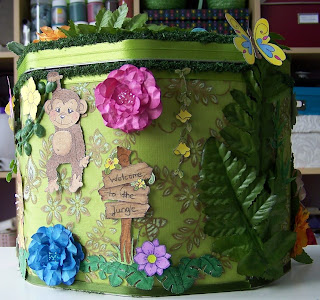 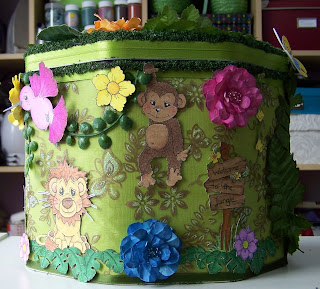 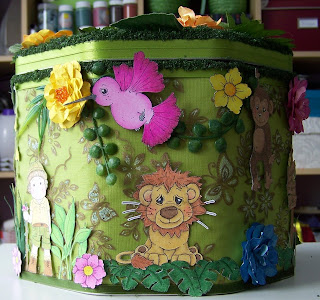 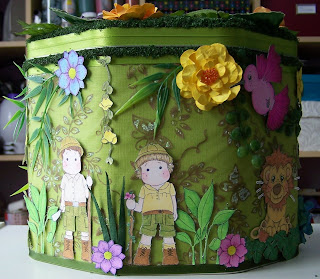 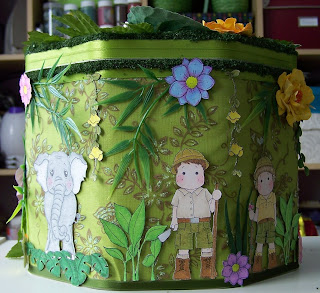 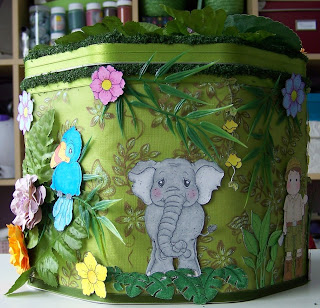 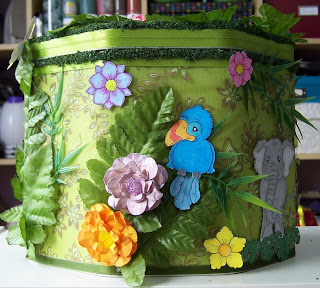 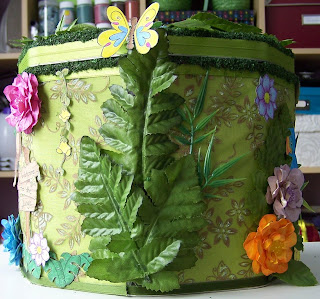 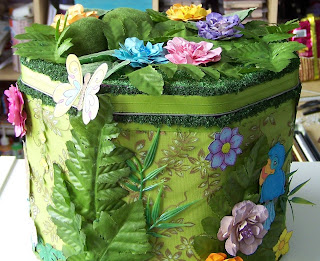 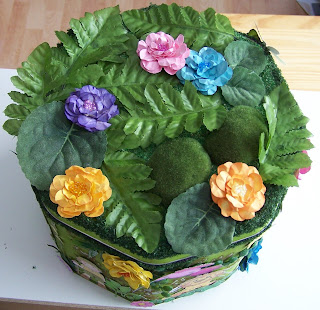 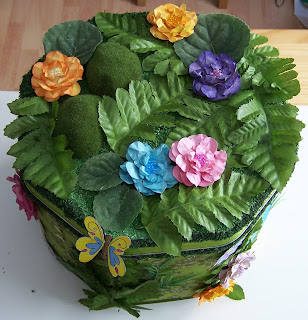 Crazy, isn't it? And you are probably wondering what is punched on there... the big flowers. No, really ;o)
I started out punching 40 big and 30 middle sized retro flowers.

Afterwards I inked every single one of them up to give it more color and depth. On some of them I used a very subtle shade, which is hard to make out on the picture. 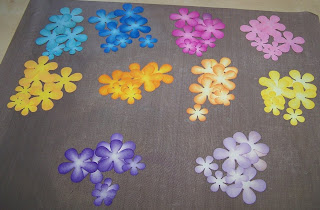 That was the easy part. Afterwards each of the little piles of punched flowers was transformed into one flower... jup, 70 blossoms, 10 flowers, I tell you that nearly killed me and my fingers (crumpling 70 blossoms, 5 petals each, HURTS). I put them together mostly like shown in the great video tutorial by Rach (made some slight changes) shimmered them up with some golden and pearl pigment and added seed beads as a centre. Voilà. I love them. 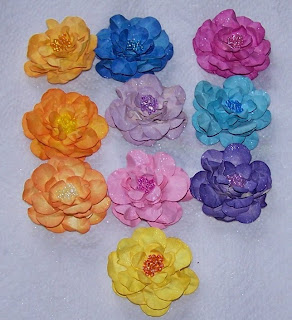 During this project I fell soooo in love with my Pinflair Glue Gel. Don't know if Simon Says Stamp stores it, but if they don't yet they should really consider it, it's the most awesome glue ever.

My second project is a lot more simple. I altered a calendar as a present for a friend of mine some months ago. Since I showed this one in the Just Gorjuss forum back then I am not going to submit it for this challenge, it's just on the picture to show the whole set.
The card and and storage tin are both new, just a little cat hair infected *sigh*. Those little devils are everywhere spreading their hair *lol* 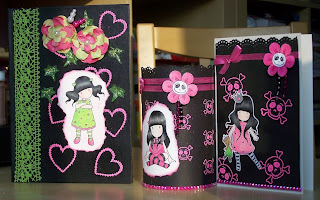 My camera screwed up on the coloring... again. I'll get a new, much better camera in a couple of months. I am so looking forward to it.

That's it. Now I ask everyone reading this to keep their fingers crossed for me ;o)
Eingestellt von kuya um 15:13 Kommentare: Links zu diesem Post

There are a few things I made during the last months I didn't show on my blog yet. I really don't know why I didn't, but... huh, I'll do it now *lol*

I made another lamp using the same kind of bottle like the pink/rose/ivy one, but this time going for a winter theme. It was part of my Christmas decoration, which was really spartan this year (due to the cats and my non festive mood).

I like how this one came out. I am not 100% percent happy with it, but it's not a case for the trash bin, at least in my thinking ;o) 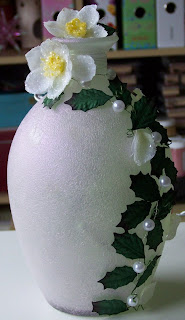 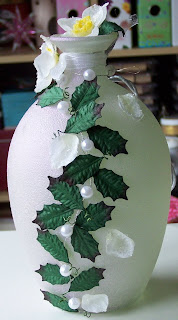 Hello world, I'm BACK! And my muse returned to me as well, thank god. Sadly I spent all of my vacation being not really sick and not really healthy, which my muse couldn't take any longer, which is why she moved back in with her mother *sigh*.
But when I saw the call for the Simon Says Stamp DT I just know I HAD to drag her back even if she was screaming, clawing and biting me in the process, because the Simon challenge is one of my absolute favourites and being on this DT would be a huge dream coming true. Of course the fact that nearly nothing happened in the last few months won't make the best impression ever, but with being assimilated by HP all of November and the first week of December at work and afterwards being not sick nor really healthy for another four weeks... well you can say when it rains it pours *sigh*.
Theme of the challenge was "shabby chic", again BIG love for me, even though my work turned out more chic than shabby at the end, but it's probably because of the item I chose. This is a jewellry box I've had for ages, but I never had a smashing inspiration for what to do with it... until a few days back that is ^____^ 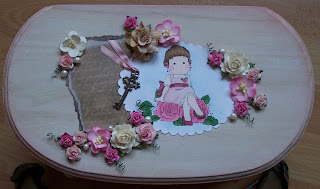 I used white wood stain on the whole box and actually did a pretty sloppy job using it (shabby, you know). It dried up veeery evenly, doh! But there are some details where you can still see the sloppyness.
After the stain had dried I used Distress Ink in Worn Lipstick to colour the edges.
The Magnolia image was masked, colored with Prismacolor pencils, masked again and sprayed with a little shimme. There is a little tranfer shimmer from my fingers on little Tilda, but she herself is mostly shimmer free.
For the text part I used ceramic paper and Distress Ink in Walnut Stain. The text was stamped using Watermark ink. 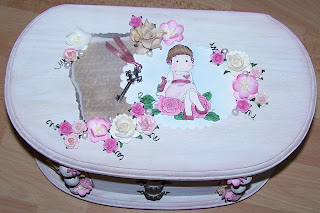 As you can see, lots and lots of shimmer on pretty much everything, but Tilda and the text part. You can see some shimmer on there two, but that's just a little transfer from my fingers and doesn't show up this bad if you don't look at it with a camera flash *lol*. 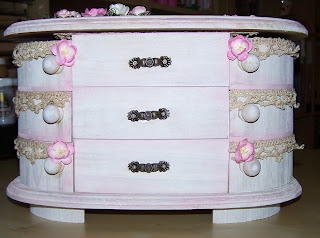 I covered the screws on the handles with little pearls and put crotched lace on the sides. When I bought this lace it STANK, obviously a smoking household *yuck*, so I washed the lace and never came around to ironing it. To get the whole thing a little more shabby, I left it as crumbled as it was, at least on the outside. 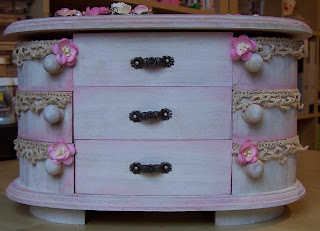 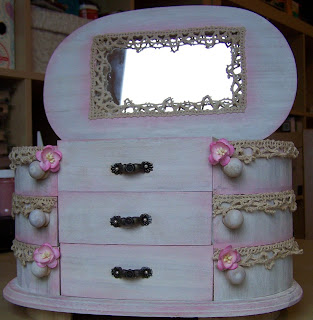 I did straighten out the lace I put around the mirror though. I don't know if it's recognizable, but the pattern used for this lace must have been all about hearts *g*. 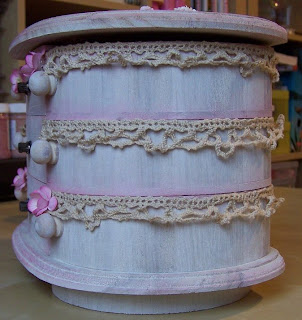 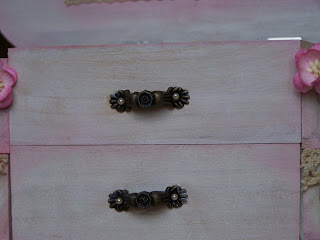 HERE you can see, I did a sloppy paint job, I'm so proud a little mess survived the drying process *lol*. Close up of the pearls as well. 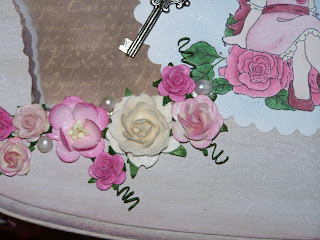 Tons of mulberry flowers and some genuine freshwater pearls, because I am going to use this box for my pearl jewellry only and thought it would be a nice and elegant touch. 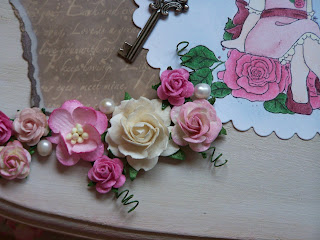